Posts about my life

Whenever I read blogs they always do the “Day 1” “Day 2” stuff so I’m going to start with that too. I have my reservations on this pattern continuing though, considering I have a bad habit on not following through. For now, though, I’ll be a passionate writer with mildly interesting stories to tell.

I was allowed to check into the Jetpack Hostel at the tender time of 11AM although the check-in time is officially 2PM. I capitalized on the free wifi and went on an instant messaging rampage, letting my loved ones and just friends know I was safe and sound. It was pretty ridiculous, and at one point, I was jumping from GChat to What’s App to KakaoTalk to iMessage. Such is the life I lead, socialite that I am, juggling four instant messaging apps.  And all for free, haha, take that phone plan!

I made friends with a Swedish guy who was staying at the hostel for academics (aka I didn’t get what he said although he patiently explained three times.  Something about wind energy). I didn’t have a clear idea of what I wanted to do, so I just nodded okay when he suggested going to Tempelhofer Freheit, a historic airport that is one of the few Nazi buildings left standing, says he. I am too lazy to look up the facts so I’ll have to double check later when I have nothing better to do. The space has since been converted into a sort of park/recreation area. This gigantic expanse of land accommodates for everyone and everything with wheels or large sheets of plastic. There were bikers, rollerbladers, Segway riders, kite flyers, then tents pitched.  There was that fragrant aroma of barbecue and delicious smelling sausages turning on the grills.  I spied an older group of men wearing matching suit jackets and burning something in the corner of the park.  I felt like I was in an arena of the Hunger Games,  I was just waiting to hear a BOOM and a body to be carried off by a hovercraft.

Some part of the Tempelhofer Freheit 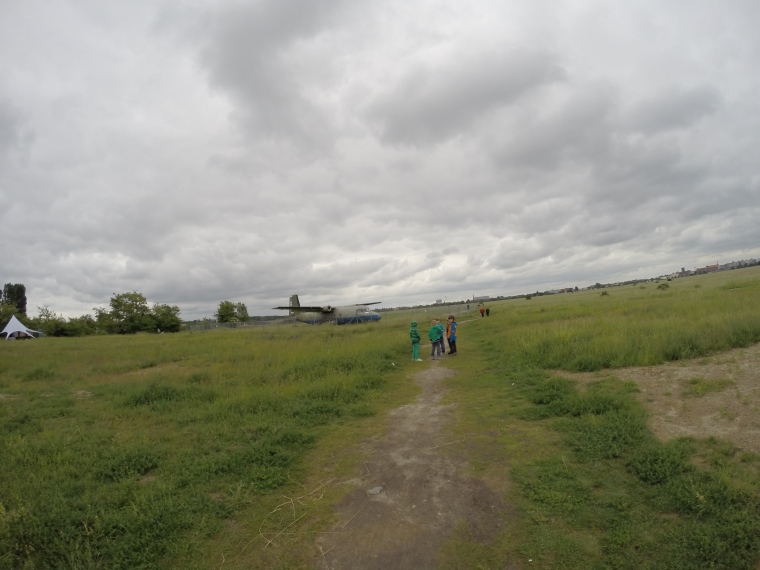 Kids passing by me were adorable, so I took a photo like a creeper 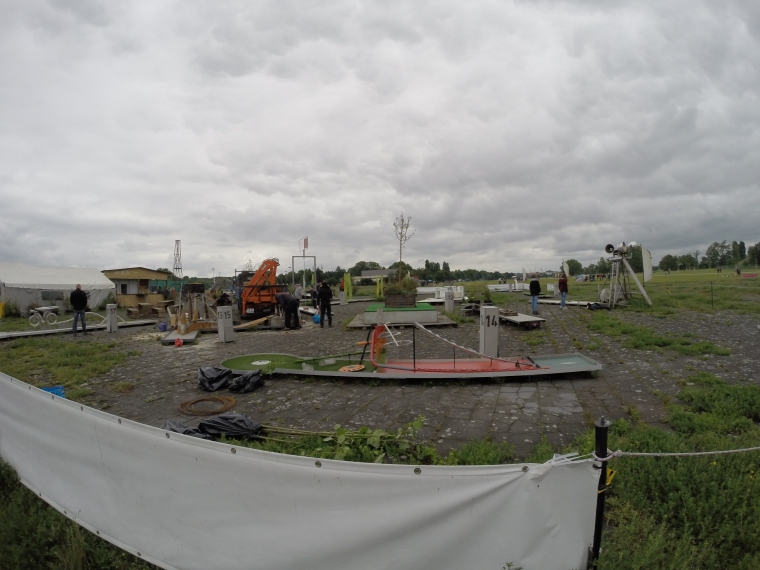 Pretty neat, the way this mini golf place was setup 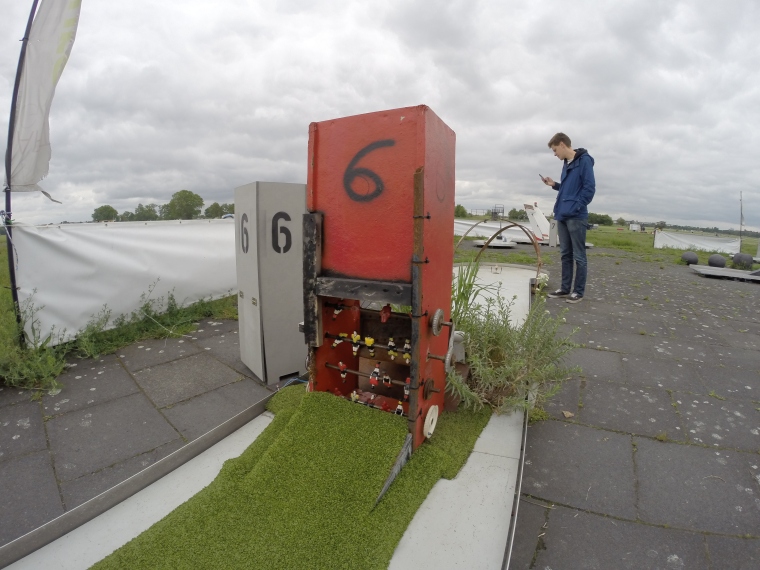 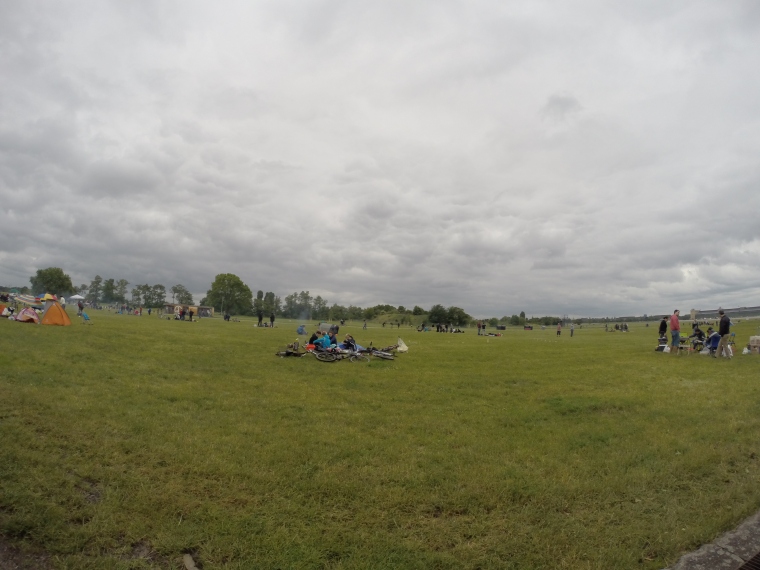 People just chilling on the grass

My new friend and I lunched at a Turkish restaurant where I ordered some Doner with the saltiest meat ever. I could feel myself getting dehydrated even further after every bite.

The bottled water here is rather pricy; I got a half liter bottle for 2 Euros. It made me wistful for Korea, where I could have stepped into a convenience store and bought one at an equivalent size for 600 won.  That’s roughly 60 cents for you Americanos.

Now, the big kaboom that made my mind explode and left me silently sobbing imaginary tears alone in the computer room in the hostel.

I thought it best that I test out my Korean debit card to make sure it would work on ATMs here. Thank goodness I did, because it DOESN’T. I refused to believe it at first, and after attempting the one in the subway, I went to a plaza and tried ATM machines from other companies before giving up. The first 3 hours after this realization that my debit card didn’t work made my mind go blank. I couldn’t concentrate on anything else, and booked it back to the hostel to find out what was going on. I asked my cousin in Korea to check blogs on Korean websites to see if others had the same problem with the same exact card. I had specifically gone to Kookmin Bank to change the Maestro to a Visa logo since I figured that Visa was more widely accepted. It was written on the back of the card as well, that foreign transactions at ATM machines were possible. My cousin was confused as well; the blogs all had no problem using their cards in Europe. Frustrated, I checked Google and lo and behold, a forum popped up specifically addressing the use of Korean check cards internationally. Apparently, the check cards given to foreigners cannot be used internationally. Dirty words.  I told my cousin what I found and not long after, she sent me a screenshot of a page taken directly from Kookmin Bank’s website that stated foreigners could not be issued cards for international use. More dirty words. I was crushed. I had decided last minute not to bring along my US debit card, since I didn’t want to have too many cards on me as that seemed risky. Little did I know I would literally have to pay for this oversight. I arranged to have my cousin express mail it to the hostel for the tender price of around 70,000 won ($70). So now I’ll be waiting on tenterhooks until the card arrives at the hostel. It’s a risky gamble but I don’t know of what else I could do. I can’t have my aunt continuously wire me money.

I figured that there would be some hiccups during my solo backpacking trip, but honestly, I would have gladly taken food poisoning over this. Physical pain and humiliation are nothing compared to this agonizing stress and worry that is consuming my mind.

After mentally reassuring myself that everything would be all right, I took a stroll around the neighborhood. This relieved some of the self hate I was inflicting upon myself, because the neighborhood is really quite beautiful. There were numerous families and old couples walking as well, and I felt quite fancy and worldly walking alongside them. The way the buildings were designed reminded me of San Francisco if it were on level ground.  Look at me trying to be all observant, I really just saw them and thought, ha they look like those houses in SF, and moved on.

Looks kinda like those buildings in SF! Not really.

The jet lag is starting to hit me, so I will end my night early looking up places to visit tomorrow. Oh, how I wish I had packed more warmly.