Posts about my life

Way back in January I went to India for the very first time, to speak at WordCamps Pune and Udaipur.  I left California in the cold and rain and fully expected a hot and humid arrival at Mumbai.  Instead, I barely survived with t-shirts, long pants, and a Northface jacket.

I technically hit up a total of 5 cities: Mumbai, Pune, Jaipur, Agra, Udaipur.  However, I only really stayed in Pune, Jaipur, and Udaipur.  Mumbai was just my door in and out of India, and Agra was a day trip to see the famous Taj Mahal.  That’s right, I saw the Taj Mahal, checking that off my nonexistent bucket list. 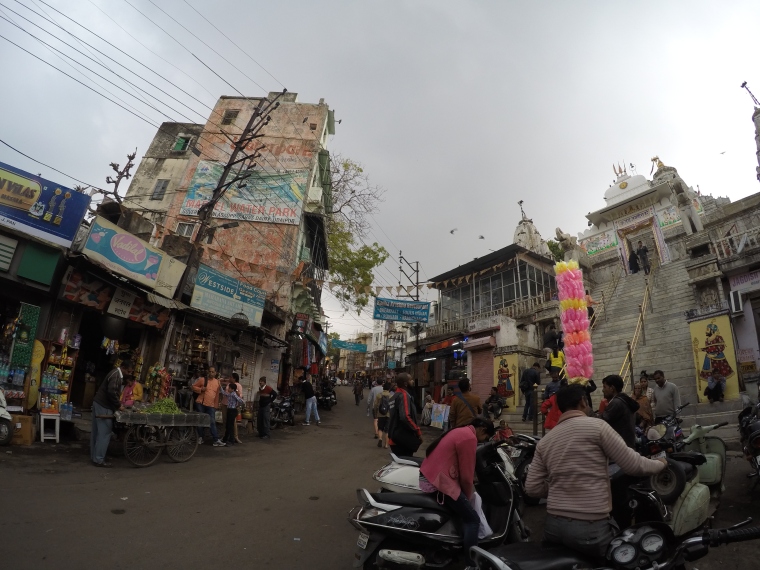 shot with the GoPro

What I had every single day: Masala Chai

I could drink this all day every day, and I did.  The hotel staff recognized me as that polite Asian girl who always asks for tea refills.  I made sure I had at least two cups every morning, it’s just that good.  Chock full of sugar, I’m sure, but whatevs, calories while traveling don’t count.  I like to think that when you travel, your body turns into a vertical pipe, where the drink and food that enter, immediately drop out the other end, with no processing done in between. 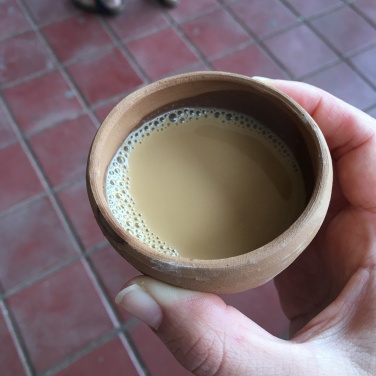 no disposable cups for this tea!

I drank a potful of tea from this restaurant.

According to The Office Season 6 Episode 17, spicy food is one way to induce delivery, so if you’re ever looking to make a baby pop out that much sooner, laal maas is an excellent candidate to make that happen.  It’s definitely on the spicier side of the food spectrum, but oh so delicious with a bit of buttered garlic naan.  It’s a Rajasthani cuisine, so I made sure to have it multiple times while staying in Jaipur. 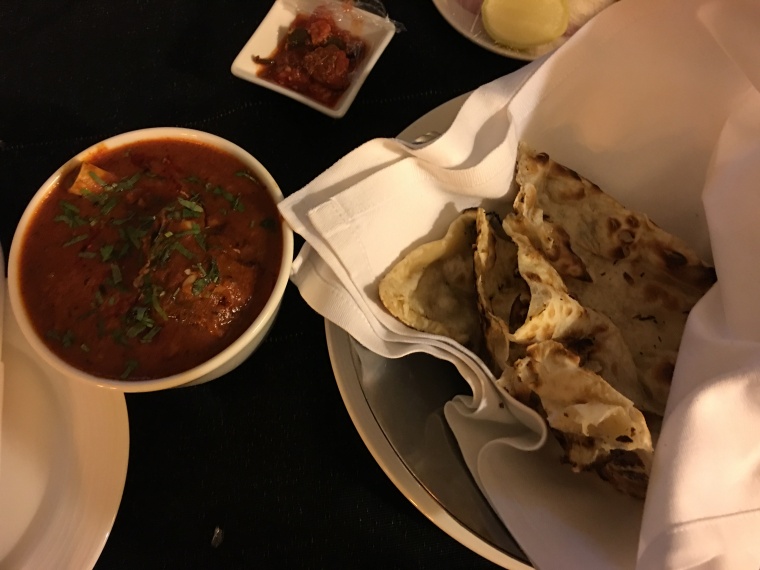 laal maas at the Hilton

I should have figured as much, considering it’s probably one of THE biggest tourist destinations in all of India, but I was certainly not prepared for the crowds of people pretty much everywhere I went.  I took the train with friends, from Jaipur to Agra.  The train itself was pleasant, a meal and a giant water bottle was included in the ticket, which I didn’t expect.  But good grief, when we finally arrived at Agra, the number of auto rickshaws milling about, offering rides is enough to make your head spin.  Fortunately, the Agra Red Fort is well within walking distance, so we didn’t need to deal with any bargaining. Yet.

inside a Jaipur train station

waiting at the train station in Jaipur

a bird with a mission

Most brag worthy: I visited the Taj Mahal

That’s right, I did!  I figured I’d make the most of flying halfway around the world.  What’s the point of going all the way to India if I’m not going to visit the iconic palace? I mean, c’mon y’all.  C’mon.

Yes, it is as beautiful as the pictures.  We went on a cloudy day, but it was still magnificent.  I liked seeing it from afar, actually, it really stands out amidst the lower residential areas.  The place is crazy packed, and you pay more than double the ticket price if you’re a foreigner.  To ever so slightly make up for it, foreigners do have perks, like having the booties that cover your shoes included in the ticket price, as well as separate lines that take you through the palace.  We didn’t have time to walk through, but I didn’t mind, it’s the outside that I cared most about, specifically the outside of the palace with me inside the picture that I was taking of the building.

proof that I am indeed at the Taj Mahal 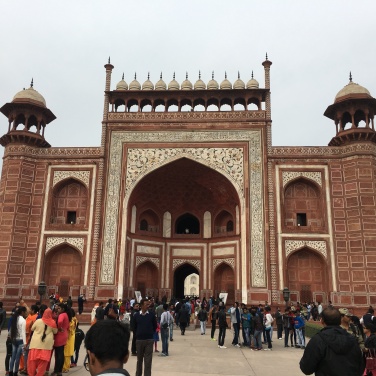 just past this magnificent building is the Taj Mahal (I think?) 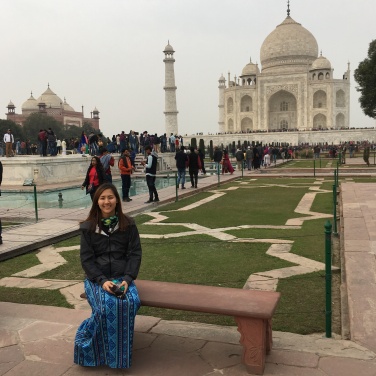 proof that I am often lonely

Best impulsive “yes”:  to attend a wedding the day I arrived

My coworker Gaurav was kind enough to pick me up from the airport in Jaipur and take me to the hotel.  I’ve heard about India’s hospitality and openness toward foreigners, but I was still floored when he asked if I wanted to join him and his friends the same night at a wedding.  The one recommendation I consistently read in every travel blog was to go to a wedding, and now an opportunity had fallen into my lap that I couldn’t possibly pass up.

Suffice to say, it was an extravagant celebration and a beautiful introduction to Jaipur.  I loved being able to experience a more personal side to India, it wasn’t some tourist attraction that every other foreigner would get to see.  The most surprising part was how cold it was; I was in jeans, t-shirt, and a North Face shell jacket and I was shivering my toes off.  I had assumed that India was an all around warm country, and this was definitely not the case.  It was colder that Jaipur night than the current weather in the Bay Area!

look at this beautiful entranceway! 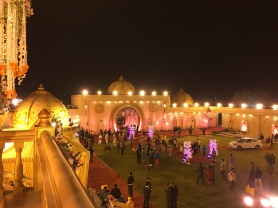 The area spans from here…

they got married up there

This was one of my greatest fears.  Time and time again, I had friends who had involuntarily regaled me of stories from trips to India which resulted in cracking the porcelain throne midway through their trips.  I ate with gusto and without fanfare, at restaurants of varying degrees of quality (once we silently watched while a rat meandered around the seats, sniffing for delectables).  I only got an upset stomach from drinking too much tea.  And I have no regrets about that one.

This was not something I was prepared for.  Growing up, toilet paper was a given, and even if I went camping, I was always armed with a small packet of tissues should the need arise.  I was at a university after my coworkers had given a presentation about the merits of WordPress.com, and the principal kindly allowed me to use his private restroom while we were gathered in his office.  After I finished my business, I reached toward the wall without thinking and grasped at air.  I started to panic.  Do I use a sock?  Are there paper towels?  Nope.  I heaved a big sigh, unhooked the water pik from the wall, and grimaced.  When you think about it though, it’s probably more hygienic than toilet paper.  So it actually wasn’t so bad.  After the job was done, I was sitting there, pretty proud of myself.  Mission accomplished.  But then I realized: I still don’t have anything to dry myself with.  And I’ll just leave it at that.

one of my greatest achievements.

Useless skill acquired that I can take back home: Eating Indian food with one hand

Whenever I ate Indian food at home with friends, I’d always use a fork and/or spoon to eat my naan with my chicken tikka masala.  The morning after I arrived in Pune, I was having breakfast with a coworker who kindly pointed out that I can eat my idli and sambar with just one hand.  If you want to rip the idli into bite-size pieces, you use a few fingers to anchor it on one side while ripping with your remaining fingers.  The left hand never needs to come into play.  And you don’t have to eat with just your hands, during my stay, I saw plenty of my Indian friends eating rice with forks or spoons, so it’s just personal preference.

gotta have my morning idli and sambar! (the white thing and bowl)

I had masala dosa everywhere I went, it never failed me. A classic. 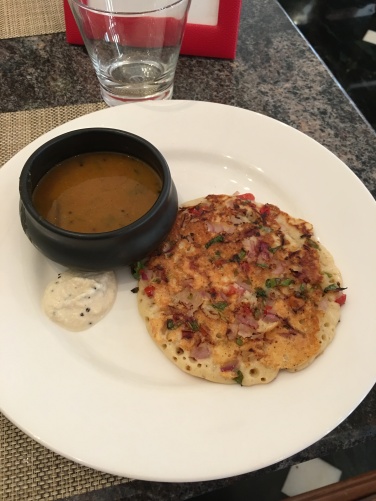 All the other pictures that I want you to see!

It was an unforgettable experience and this is probably one of few countries that I visited long enough to feel like I really got to see a more normal side of a city, and not just the touristy stuff. I’ll leave you with a mess of pictures I took that didn’t work for any of the topics I covered above.

I always travel with my Grid-It Cocoons. Best organizers when you carry lots of electronics. 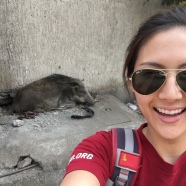 just a hog on the streets of Pune

I came to Pune for a work thing, actually.

one of my favorite pictures that I took.

you can see the planets so clearly at night! 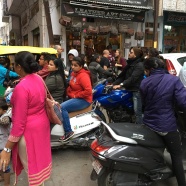 the alleyways got congested at times. 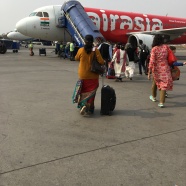 taking the plane to Jaipur

from the hotel grounds in Udaipur

a shot high up in my hotel in Jaipur 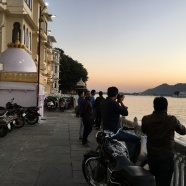 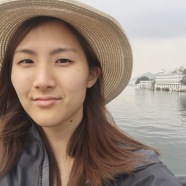 no one wears hats but me. 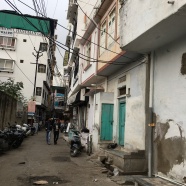 one of the alleyways we walked through

that white palace is supposed to be super fancy

the poor elephant in Udaipur 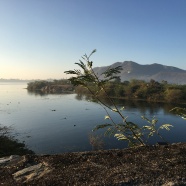 right over the hotel grounds in Udaipur