I haven’t been back in LA since I graduated college, and this weekend did not disappoint in capturing the perfect weekend-in-LA experience. This was largely due to the fantastic food that my friend and host for the weekend introduced to me. I was exhausted on my Flyaway shuttle ride to LAX from Union Station, but this was because of how much I ate rather than the amount of physical activity exerted throughout the weekend.

Fly into LAX with Southwest

I’ve always had a good experience with Southwest, never had to deal with canceled or delayed flights.  A highlight is their honey roasted peanuts, and the fact that they give you not one but two packets with your drink. I also discovered that they don’t charge a cancellation fee for changing or canceling your flight. The latter will only let you give you the cost equivalent in credits to your Southwest account, but that was fine with me since I planned to fly again soon. Do note that you can cancel entire itineraries online on your own, but if you booked a round trip then you’ll have to call their customer service.  The only annoying part was having to wait for the baggage carousel to get started, I’m used to already seeing bags doing their rotations by the time I reach baggage claim.

Renting a car through Hertz

I was torn on whether to book a car through Advantage or Hertz. Advantage was cheaper, but Yelp reviews of the Inglewood location complained about the inconsistency of the shuttle service and how it’d come every 20 minutes or so rather than the 5 minute wait for the shuttles of the other, more established rental companies like Enterprise and Hertz.  I’ve learned that it’s often never worth it to compromise quality for cost, and that there’s usually a reason why services are cheaper, so I stuck with Hertz and was glad I did. The driver helped me with hoisting my luggage on and off the shuttle, and although there was a bit of a line when we arrived at the rental center, at least four desk agents were active at any given time and they even had kiosks on the side if you wanted to make your rental without the aid of a human.

The desk agent we ended up with wasn’t pushy, confirmed our reservation, and just made sure that we wanted the compact car. He didn’t push for any upgrades or extras that would cost, and I was grateful for that.

Our compact car was a bright red Chevy Sonic. Volleyball players would suffer trying to wedge themselves between the driver’s seat and the wheel, and I’m pretty sure they’d have to keep the windows rolled down so their knees could stick out. The Chevy Sonic was made for Air Force pilots.  On the plus side, it didn’t eat a lot of gas.  Then again, we only made four trips with the car, a round trip between LAX and DTLA (downtown LA) where my friend’s apartment was, and a round trip from DTLA to K-town for a wedding. I think we only had to fill up a gallon or two before returning the car to Hertz. With a corporate discount, it was $56 total, no insurance or GPS. 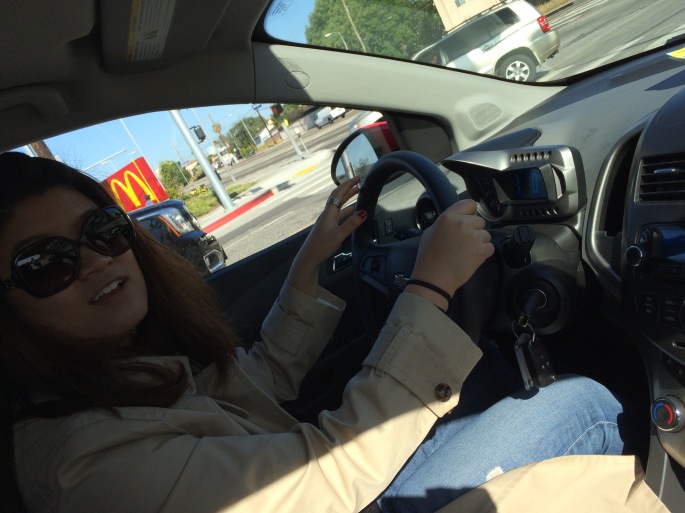 I traveled down to SoCal with my friend Yeri, and she invited me along to meet her friend at EggSlut.  This is apparently one of the latest trends to eat, and you can find it at the end of Grand Central Market. It’s hard to miss simply because of the ridiculu so lines that form.  I think we may have arrived sound 9:40, and although we were lucky enough to find Yeri’s friend already waiting in line, it was at least another thirty minutes before we reached the cashier. I got the Fairfax; it’s good, but definitely needs a breakfast sausage to really round out the flavors. It’s a delicious treat, but nothing that I would want to wait an hour and half standing in line for. 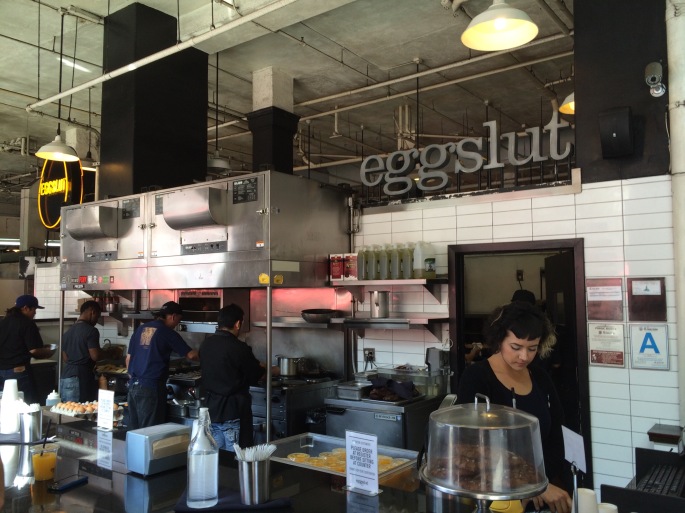 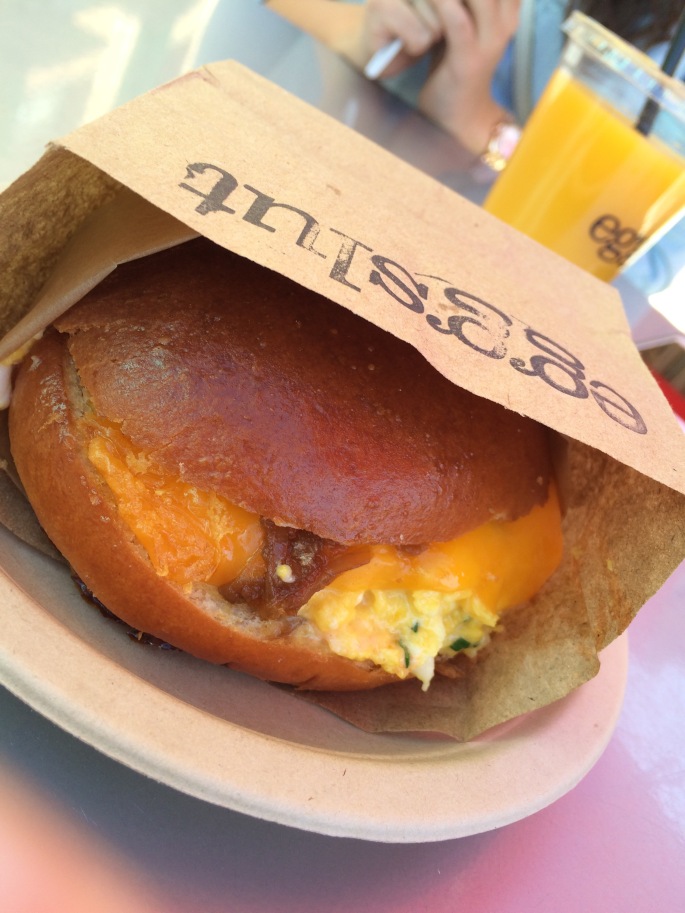 After eating our egg sandwiches outside at one of the chairs and tables arranged along the sidewalk, we headed to the opposite end of the market to drink coffee at G & B, which is apparently quite popular and trendy to the point where rather than standing in line at a cashier, you just go to up any available barista and after he/she takes your order, he/she will run the transaction on an iPad and swipe your card through a little thingie attached to the iPad. 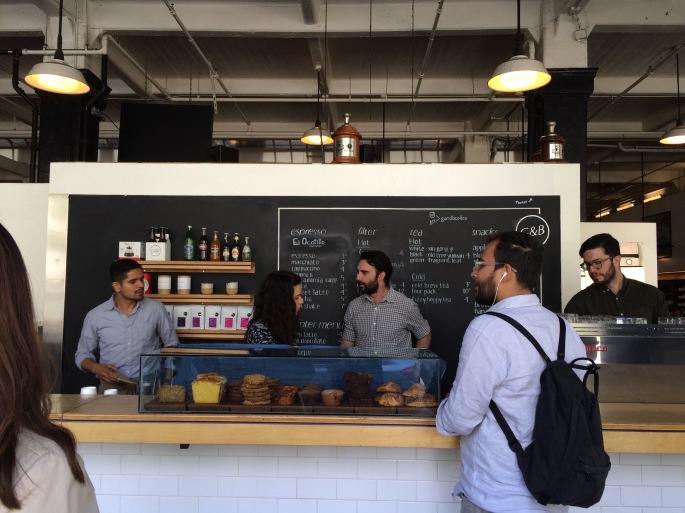 After resting up, Tammy highly recommended that we lunch at this place, saying that this establishment has ruined her for other ramen. It’s not big so anything larger than a group of four will be a struggle to seat immediately, and even we four girls were debating on splitting up in case we could only sit at the bar.

Fortunately we were seated altogether, and our order came relatively soon after since we had put it in while waiting outside.  We stuck to sharing two bowls of the same Tuskemen (dipping noodle) with a Soft Boiled Egg. We got the large size but should have settled for a regular as there was a lot of noodle leftover.  I’d say this was one of the biggest tastebuds highlights of my stay in LA.  I’m usually rather incredulous whenever people tell me that a place is a must eat, since my unrefined taste buds can’t really tell the difference.  However, the fact that I agree this ramen is unlike any other is evidence enough that it’s actually worth going to, and that the hype is authentic.  It could be attributed to the enormous amounts of fat floating in the pork bone broth. Fat equals delicious, for example French fries and anything fried, really.  You can actually see the fat dotting the broth, and apparently that’s what makes it cling to the handmade noodles. And that’s another delicious part, the noodles. I mean, how big of a difference can some noodles make? Noodles are noodles. Apparently these were the exception, as they complemented the broth wonderfully and I was dipping chopstickful after chopstickful of amazing noodles into the amazing broth.  I do not recommend drinking the broth unless you want to go under cardiac arrest for clogged arteries.  This restaurant was a big yes and definitely a place I want to recommend to others. 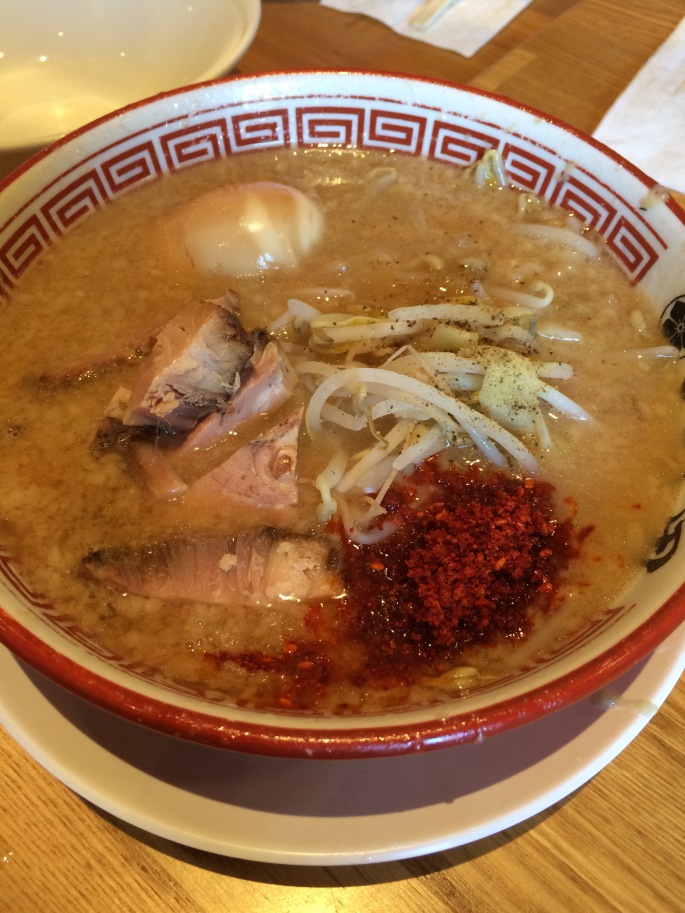 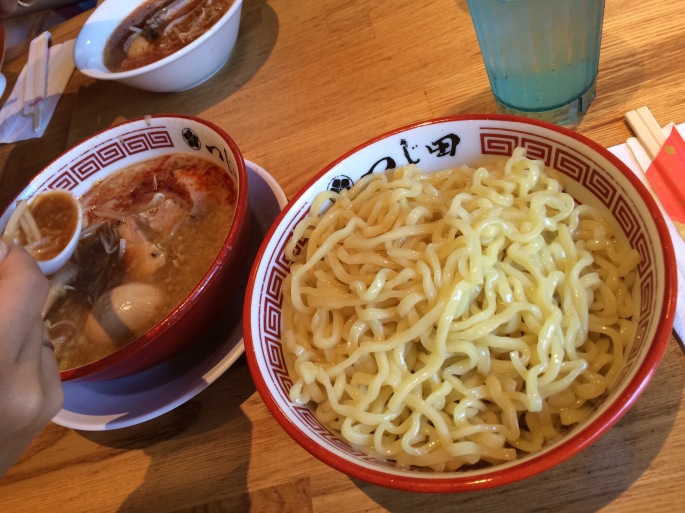 Car wash and Pies at the Pie Hole

Tammy needed to get her car washed, and the closest place in DTLA was in the Art District, so she dropped her car off there and we all walked to the Pie Hole.  For what it’s worth, this car wash was excellent and as it’s hand washed, there were a lot of luxury cars waiting, like BMWs and a Porsche.  The place itself isn’t much to look at and in fact rather questionable upon first impression, but they did well and Tammy was very satisfied with their deluxe car wash package, which I think was around $14.

The Art District feels very hipster and cool, and this impression was confirmed when the first thing I saw was some ridiculously skinny boy strumming a guitar while his equally cool and philosophical friends nodded along beside him.  The wall murals in the art district make for great backdrops and there was a bridal party in the middle of a photo shoot when we were there.

The Pie Hole is another trendy place that’s booming, so of course we had to wait in a line that was leading out the door. They have both sweet and savory pies, but we opted for their famous Maple Custard and Mom’s Strawberry pie. The maple custard was delicious but not much different from a crème brûlée, while the strawberry pie had quite a lot of jelly with a couple large strawberry slices.  I’m more of a chunky fruit pie lover, like a peach or apple pie, so I wasn’t over the moon about either pie but my friends looked to enjoy themselves immensely. 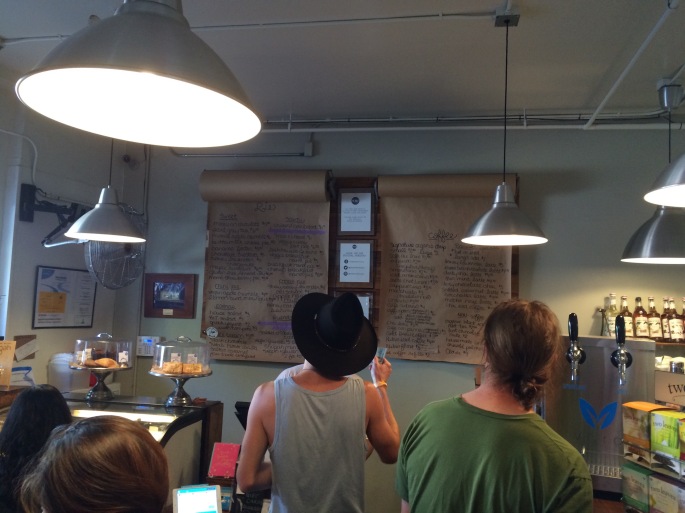 I came to LA to attend a university friend’s wedding. To sum it up, waiting, fog machine, spotlight, picture slideshow, amazing food, open bar, games, wedding cake, then home.  Oh yes, I forgot there was also a photo booth thing, that was great and after the open bar I think that had the next longest line.  This was my first time attending s friend’s wedding, and I don’t know if I’d care to repeat the experience because I was exhausted by the end.  This was probably more because I had stayed up ridiculously late packing for this trip and my offsite meeting.

Sunday morning, my friend and I walked downtown through the farmer’s market. We came upon a stall for the Big Easy bar, whic specialized in Cajun food.  After not much cajoling, we got the chicken and andouille jambalaya for $10.  Absolutely fantastic, fresh out the pan into the to-go box. There wasn’t anywhere to sit down, so we just stood on the sidewalk and ate with the box propped on a bike rack. We must’ve looked either very hungry or ithe smell traveled well, because a girl came over asking us where we got the food.

We mosied over to The Last Bookstore, a fantastically quirky establishment that makes you feel like you’ve stepped onto a movie set. Words can’t describe it, it’s just got great photo opportunities everywhere and books stacked into book tunnels and arches and all that goodness. Do note that you have to check your bag at the door. 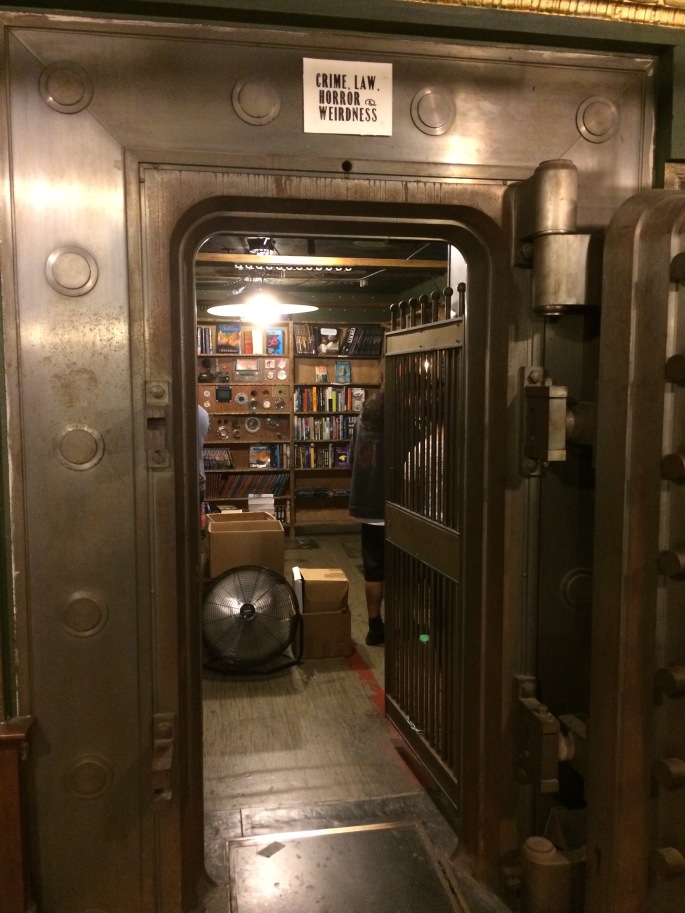 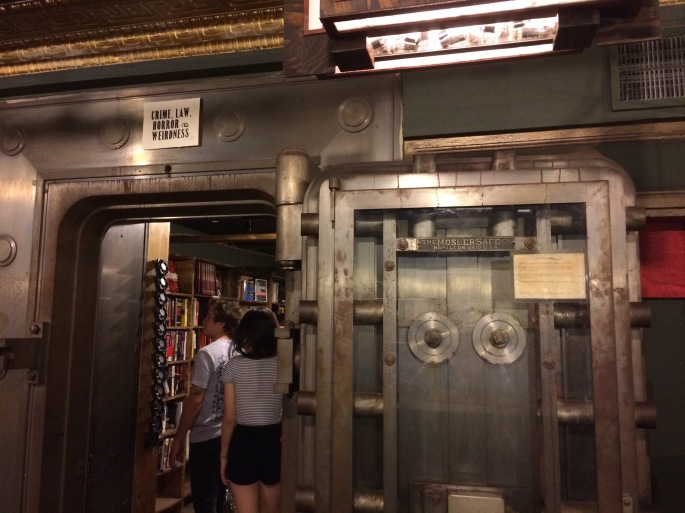 I was meeting a friend for lunch at Guisados, and ordered an horchata to tid me over while I waited for him. No regrets there, I had the taco sampler which was good but cannot beat the cinnamony heaven of horchata. Interestingly, Guisados has slow braised meats so you won’t get your typical carne asada fix here. It’s clean and got lots of natural light coming through its giant windows so it attracted a diverse clientele. 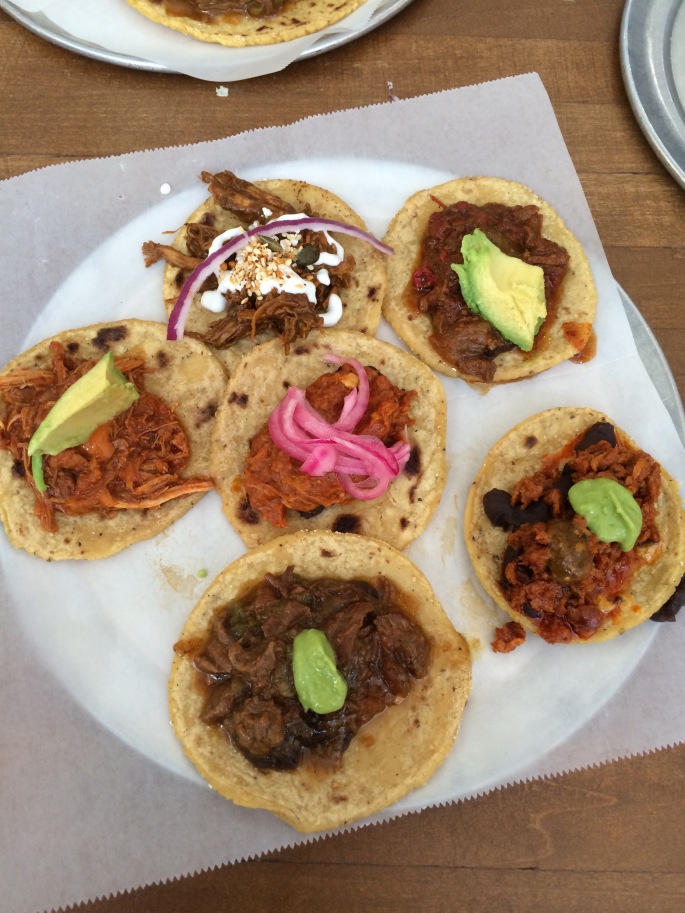 I worked at Caffe Primo for a while nursing a dark mocha, also good and quite chocolatey.

Burgers at The Counter

I met a friend for dinner at The Counter on 7th Street. Street parking was impossible and we also managed to drive through a wedding photo shoot that was happening in a dead end street. The worst part is, after waving our apologies while making a u-turn,  we got stuck at the light so what should have been a beautiful couples’ shoot with the LA street stretching out behind them ended up with the butt of our car being a featured guest.

I settled for the premade burgers at The Counter, although you can customize your own. I had the 1/3 pound Counter burger with sweet potato fries on the side. Delicious and a great bun. No complaints here, plus the staff was friendly. Too friendly sometimes, as one guy creeped us out by asking where we were from, and really trying to triangulate our home townsIt’s an innocent question and I’m sure he was just trying to sound welcoming, but considering he was a third random waiter face in the span of three minutes, rather unnecessary.